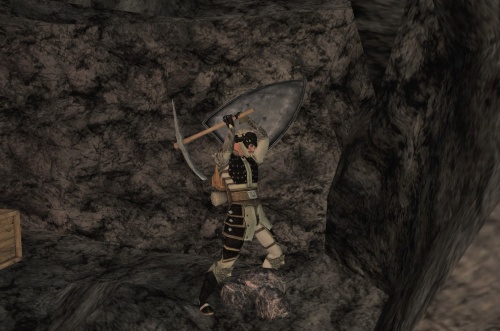 A Miner at Work

Mining a cave wall inside of a mine will remove that tile of rock. It takes 45 mining actions to produce the message The wall will break soon after which it takes 1 to 11 actions to fully remove the tile.

Ore is produced by mining metal ore veins found inside of a mine. Marble, slate, rock salt, and sandstone veins produce shards. A Rock salt tile has about the same amount of shards as a regular rock tile, approximately 50 shards.

Proceed with caution when adjusting the floors as mining is not easily reversed. When digging you can always drop the dirt and refill the hole - this is not possible when mining.

Standing on a flat cave tile will permit the leveling of an adjacent tile so that it will be at the same height. To see if a tile is flat, activate a pickaxe and hover over the tile.

Surface mining is the action of shaping external rock or cliff faces to prepare an area for tunneling, adjusting terrain for other uses or simply for aesthetic reasons.

You can limit access to your mine with the use of a mine door. Several types of mine doors are available.

Remember that off-deed mine doors can be bashed by other players, so your mine is not entirely safe just because it has a mine door attached. A deed perimeter does NOT protect mine doors.

Dropshafts are typically unfavorable in mines. They link two sections of a mine together which have a height difference of many dirts. They are not easily traveled through. Vehicles and horses will not be able to move between the levels, and a player must climb to move between the two.

Proceed with caution as these are very hard, often impossible, to modify once created.

Any excavated cave tile has a chance of caving in.

A cave wall reinforced with a support beam off deed is literally impossible to remove. Please be mindful of this.

As with most things in Wurm, too low difficulty leads to reduced skill gain, while too high difficulty results in high failure rate. A failure results in a 1.00 QL shard.

Note: In order to gain skill from a mining action the by‑product has to be anywhere in between 1.01 and 39.99 quality range.

Note: All tests were done with a 25ql pickaxe.

If you want to optimize mining skill gain, you need to pick the correct QL pickaxe for your skill and for the vein you are mining. You can use the formula:

Plug in the variables you know, and solve for the remaining variable.

There are several types of resource which can be found while mining:

Other resources which can be found include salt, gems, source crystals and flint.