Difference between revisions of "Religion"

Religion takes a very large role in Wurm Online, from creating enchanted items and casting offensive spells, to using rare and unique artifacts sent from the gods. Although it's entirely possible to have an enjoyable experience without religion, it can help to take away some of the monotony of day-to-day life for a Wurmian and provide an extra edge during combat.

In the beginning there were four gods; the three white light gods Fo, Vynora, and Magranon and the black light god Libila. In more recent times, some Wurmians had succeeded in their efforts to ascend to godhood and for a brief time, Wurmians turned from the old gods to worship new ones. Thankfully, now the player gods have been proven false and religiously minded Wurmians have returned to worship the four original gods.

Following a religion gives many bonuses to a player, the greatest of which is the ability to become a priest or champion

Followers are those who have decided to accept a religion into their lives and by doing so will trade a small number of restrictions in exchange for deity bonuses and the blessing of their god.

There are two ways in which a Wurmian may become a follower of a god; by being converted by a current follower or by starting on a pilgrimage to one of the special altars: the Altar of Three for white light gods or the Bone Altar for black light. Becoming a follower will provide small bonuses whilst in the domain of the respective god and will also open the path to future abilities through priesthood. Many Wurmians are followers and enjoy their life without ever considering becoming a priest.

Once a follower has decided to give their full devotion to a god they may seek out another priest to request promotion. In exchange for priesthood they agree to give up certain abilities that would not favour their god, such as digging, mining, or theft. Each god will punish their respective followers or priests for engaging in activities they do not agree with however not all gods follow the same ideals; for example some may permit mining while others may not.

All priests gain the ability to conjure spells. The knowledge available to them depends on their faith and which of the gods they've devoted themselves to. Casting these spells uses up their pool of favor. They also gain reduced stamina drain whilst on terrain favoured by their deity.

A champion has done more than just devote themselves to their god, they have put in blood and sweat to prove themselves second to none. They have done the bidding of their gods and proven themselves worthy by focusing their efforts on practising the functions required to be noticed. Fo and Vynora watch those who have soul depth and Magranon and Libila those who seek soul strength.

As a reward for becoming a champion, priests are given massive bonuses to their religious and characteristics skills, increased defence, and faster healing. Becoming a champion is not easy, nor is retaining the title. There are a limited number of champions each god will permit at any time and death will reduce the faith a god has in their champions. They will be demoted for too many failures. 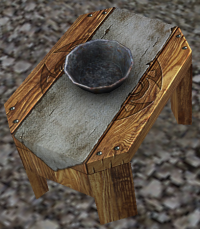 The domain of a god provides bonuses to all their followers, priests, and champions. An altar provides a portal from which a god may funnel their domain into the lands of Wurm and also a place where followers may pray or sacrifice in respect to their deity.

Whilst in the domain of your deity any follower, priest or champion will receive a small bonus to some of their skills, such as fighting skill: these bonuses vary between gods. The strength of the bonus is affected by many variables such as the follower's faith and alignment, the distance from the altar and its quality.

The distance of influence for a domain depends entirely on the quality and type of altars nearby. The highest quality, and therefore most influential, will control the domain in the area.

Animals of the gods

Religion is also the top branch in its respective skill set, covering preaching, prayer, channeling, and exorcism. The religion skill itself holds no confirmed additional bonuses but does provide special titles for those who meet a milestone. The religion skill increases with gains in the 4 child values.