Difference between revisions of "Server types"

Wurm Online has the following types of servers that players can access:

You can sail across some server borders, depending on which cluster it belongs to. This will leave your skills and items intact. Animals cannot cross server borders unless by the means of creature cages.

NOTE: If you are traveling across server borders, make sure all passengers are logged into the ship prior to crossing the border. Players logged off when a ship crosses the border may be left at their last log-in position on the previous server. 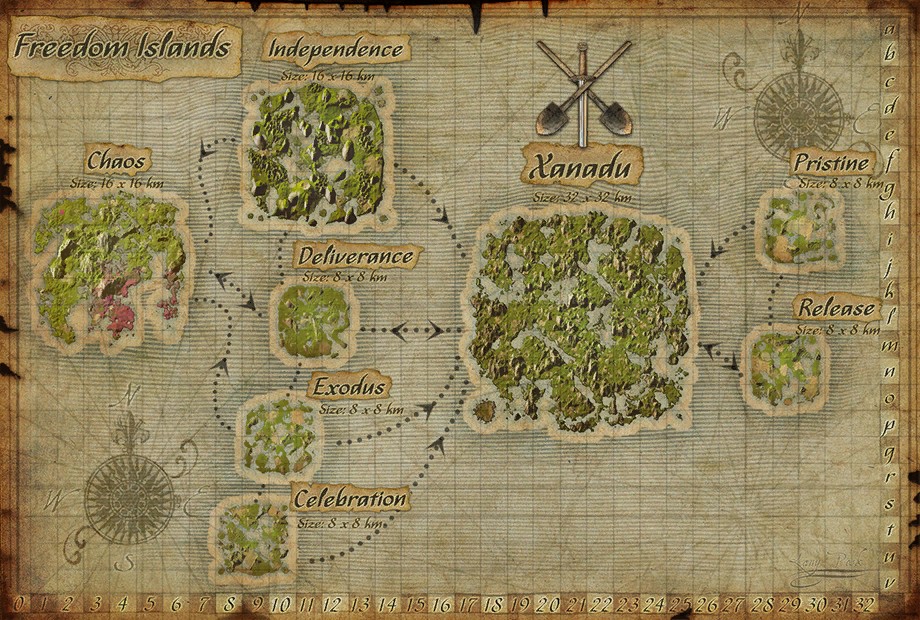 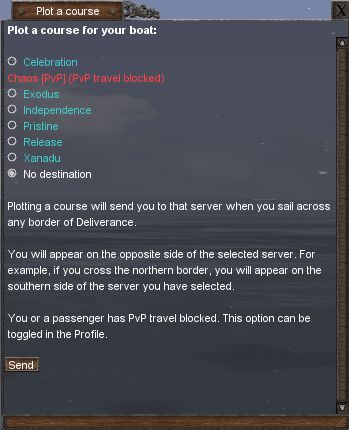 You cannot sail or otherwise transport between the Northern Freedom Isles and the older servers. You may take a portal between Harmony and Defiance, but none of your items will transfer.

Golden Valley is the login server and was formerly the tutorial server. While a few players still maintain GV characters and deeds, players can no longer go to this server to play. Haven is the new location of the tutorial.

The entire area of each server is automatically claimed as Freedom kingdom territory, so guard towers are not required to plant deeds. Griefing is frowned upon, and is a potentially bannable offense. GMs will police these servers as needed, but ideally the game rules should take care of things automatically. Moderators police the kingdom chat channels to ensure the chat rules are followed.

This was a new cluster starting with Pristine at the official release of Wurm Online 1.0 which wasn't connected to freedom cluster 1 for one and a half years in order to provide that total newbie feeling. The second server in this cluster was Release, which is situated to the southern border of Pristine. Sailing west from either of these servers leads you to Xanadu.

The Chaos server is a PvP enabled Freedom cluster server. It can be access by sailing west from Independence, Deliverance, or Exodus. Upon arriving here you are automatically in the Freedom Isles kingdom and can join other Player Made Kingdoms. Sailing back east to Deliverance will put you back in the Freedom Isles kingdom, while returning to Chaos will put you back to whatever kingdom you were in when you left. Full PvP is enabled here between the Freedom Isles and Player Made Kingdoms. You can fully raid deeds, pick locks, and bash things on deed. GMs generally avoid intervening in PvP server affairs. However, excessive griefing and other violations of the game rules will be punished as appropriate.

The Epic islands are made up of 4 different islands, arranged in a T-shaped pattern. These are all PVP servers. The Epic cluster is affected by The Curve, a skill gain formula that can allow new players to catch up to older players.

The central island is named Elevation and is the crossroads where the different kingdoms meet and engage in warfare with each other. Elevation is a premium-only server. Elevation can have player made kingdoms founded on it.

The homelands are connected only to the Elevation server, not to each other.

The Northern Freedom Isles are the newest servers, consisting of two PVE servers (Harmony and Melody) and one PVE server (Defiance). These servers are currently cut off from all other servers in Wurm to allow for new players to grow and skill together. Normal Freedom/PVE rules apply on the PVE servers, but Defiance has its own PVP rule set.

The Jackal server is a seasonal server that refreshes with new challenges and closes to be be wiped and restarted after those challenges are met.