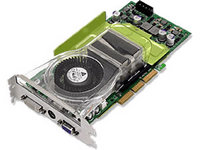 An AGP Graphics Card as found in most Desktop Computers.

One of the most common problems with Wurm (and a lot of games) is ensuring that your graphic card is compatible. Wurm requires Java and OpenGL so forget about DirectX, there is no need to update to the latest versions or include this in your list of worries. Let's get Java out of the way. Go to http://www.java.com/download and click on the bright red 'Free Java Download' button in the middle of the page. Download, install and be happy. The recommendation is for a minimum java version of 1.6.33 and the action just taken will ensure this.

This now leaves us with your graphic card to deal with. Wurm requires a minimum of OpenGL 1.3 and this is usually supplied as part of your card's video drivers. If your card manufacturer does not supply the OpenGL drivers or they are inadequate then often there is little you can do except get another card. As each manufacturer is different, the rest of this will be broken down into manufacturers. For each individual entry use OS / Version / GFX Card / Status where status can be ok, broken for fixed #nnn where nnn is one of the corrective actions added by contributors.

ATI drivers are available from http://support.amd.com/us/Pages/AMDSupportHub.aspx .

NVidia drivers are available from http://www.nvidia.com/content/drivers/drivers.asp .

Some ATI and NVidia graphics cards, mainly onboard and laptop models, are not supported by the standard drivers. You will have to get the drivers from the manufacturer of your laptop etc. and those are often outdated.
Therefore it is sometimes impossible to get drivers that are new enough to support Wurm.
If this is the case, then your only chance might be to use these unofficial, third-party drivers:

NOTE: These drivers are supplied as-is and are NOT guaranteed in any way. Use of Omega Drivers is at your own risk!

Sometimes the terrain will show a kind of red shadow. This can be fixed on Windows XP by installing the latest graphics card drivers from Intel. Version 5248 of the Windows XP driver is known to fix the red terrain. The current Windows Vista/Windows 7 drivers do still show the red terrain.

Some laptop manufacturers do not provide updated drivers so you may have to uninstall the manufacturer supplied driver and install the latest driver from the Intel website.

Some models of the SiS 740 series of motherboard chipsets are equipped with a very low-end 3D accelerated IGP (integrated graphics processor).

The usual motherboard setup (not user modifiable) is to share system memory to video memory. This leads to very poor performance. Add to the recipe a lousy OpenGL implementation in their drivers, and you get a motherboard that can play Wurm without extra hardware, but with lots of rendering errors, most of the text missing and clumsy gameplay. This setup is highly unrecommended.

Fortunately, these chipsets support an external AGP board and the motherboard manufacturers were keen on placing a AGP port on most motherboards equipped by them. If this is your case (check it out!), buy either a recommended ATI or NVidia card for a much better gaming experience.

Incompatible. 3dfx ceased operating in 2000 and was purchased by Nvidia.

Most S3 graphics cards (E.g Savage/ProSavage/Twister) cannot run Wurm, but please add your card here if you can play Wurm with an S3 card.

Unknown? Matrox Parhelia may be able to.

If you don't know what your graphics are then it's time to identify them. To do this:

Intel has some documentation and a free utility you can use to identify your Intel Chipset, including any Intel Graphics. You can download it from Intel: http://support.intel.com/support/chipsets/chipsetid.htm

Post what the utility says your "integrated Graphics" chip is.

The WurmClient needs at least OpenGL 1.3 and the following extensions (plus some others):


The following OpenGL extensions are used if supported:


This will list alternative ways to show the OpenGL version and extensions supported by your graphics card and driver.

Linux
glxinfo will list something similar to the following:

visualinfo is a small dos utility that displays all available visuals, aka. pixelformats, in an OpenGL system along with renderer version information. It shows a table of all the visuals that support OpenGL along with their capabilities. The format of the table is similar to that of glxinfo on Unix systems.

glewinfo is a small dos utility that displays the OpenGL version, provider, and an extensive list of OpenGL extensions.

This will be a list of actions which led to a working setup. If the actions are complex and not a one liner then consider adding a page with the detail and link to it.

Setups that are known to work

This site provides comparison tables with several linux cpu/card combinations running glxgears: http://www.holarse.de/?content=/treiber/benchmarks/ This should give you an idea of how fast graphics cards are in linux.

Delphi3D has a nice hyperlinked list of OpenGL extensions that reports which card/driver combinations support a given OpenGL extension and has a link to the SGI specifications: http://www.delphi3d.net/hardware/allexts.php

Tech Report.com have a good, sortable table of Graphics Card specifications: TR's graphics comparison table. Although it only includes up to the ATI X850 and NVidia 7800GT, that should be enough for most people

Note: some of the information here has been harvested from information posted by Wurm users in the Wurm forums.

Also remember that you will need a graphics card with the right output for your monitor. Most graphics cards and monitors use VGA but some newer models now use DVI. There are many different types of DVI and they should all be compatible with each other. DVI gives a better quality picture than VGA, so if you are looking for a graphics card/monitor, try to buy ones that support DVI.