Caves are lined with cave walls which can be reinforced with a support beam to create a reinforced cave wall to prevent collapse. Cave walls can be mined to extend the cave and find various ore veins. Prospecting will tell that rock can be mined here and, on very rare occasions, flint.

Note: setting cave detail to "normal" instead of "high" will allow the player camera to clip inside some of the more pushed out polygons, thus allowing the player to see under the terrain. This is useful for trying to connect cave tunnels.

Mining on this tile about 50 times will remove the tile and expand the cave. Gems and other substances can be found randomly when mining.

See Mining warnings for information on problems when trying to mine cave walls.

Its a cave floor. This surface may be prospected and mined for stone shards. Repeated mining will gradually lower the height of your nearest corner by 1 dirt/slope per action. You can raise corners of cave floors by using concrete, or having a mag priest cast Strongwall and then re-mine the created rock tile.

A cave ceiling is the tile that is over you inside a cave. It can be mined and prospected. While prospected and with a prospect skill high enough, it will show the quality of the cave tile and it can reveal if a ore vein is close. The quality of the cave tile will always be the same as the cave wall it came from. It can be raised by mining it. The maximum amount it may be raised is 30 before it is out of reach. 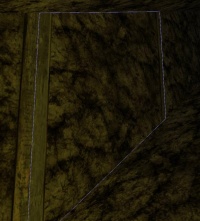 All walls around a tile need to be reinforced to help protect against collapsing.

Reinforced cave walls cannot be mined to remove the reinforcement, unless found under a deed.

Attempting to mine a reinforced tile outside of a deed gives the error message 'The rock is too hard to mine'.

The disintegrate spell can be used to remove reinforced cave walls; under certain conditions.