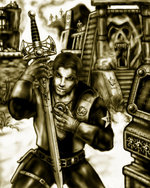 This is the only known depiction of him. A very faint etching on the frame reads "A contemplation of Darkness..."

A warrior of the twelve Keepers of Truth who defeated the last of the Ageless, a treacherous act that cost him his life. Some say the Gods themselves commanded him to do it, taking control of his body for a time.

An archeological dig in the year 990 NT, in Golden Valley, where the strange portals to Wurm were discovered, uncovered a strange stone artifact with this single inscription:

"The truest of powers will be fleshed on the bone,
And the ageless tempt nature to prey on its own
With blood at the altar, the vision shall come,
When the eyes of the moons are as round as the sun
In the citadel raised by the lords of before,
The stone twins await--- both the power and the law
Then the past and future shall finally show,
To the wounded the secret the blacklighters must know
And a shall be witness to that which will be,
In the mind of Libila, then none shall be free."

Some believe it may be a warning to those now living in the Lands of Wurm, and as such the Tablet was sent to The Abbey's Archive for further study.

It is also interesting to note that his death is celebrated on the starfall of Omens.