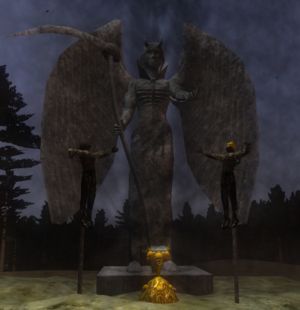 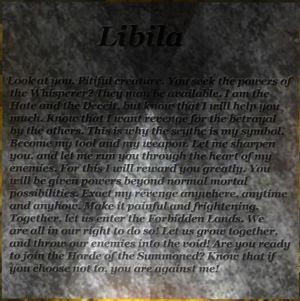 The Bone Altar can only be found within the Holy Ground on the Chaos and Elevation servers, and is home to the evil goddess of Libila. The White Light counterpart is the Altar of Three.

A large Black Light shines upon it, which is visible from most of the server.

The destruction of the Bone Altar is one of the goals in the war between the White Light Kingdoms and the Horde of the Summoned. It is rumoured that destroying a Great Altar requires your followers to have more than 5000 faith in total. The Break Altar spell or certain Artifacts can be used to destroy an Altar. Damaging one of the Altars triggers a server-wide event message, alarming any who may want to intervene.

The effects of destroying the Bone Altar are as follows, and are server specific to which the Altar resides on (these were learned from the results of a bug, and may change):