The Path of Insanity is one of the paths you can join by meditating. Some followers have admitted to seeing strange hallucinations, or have been seen to interact with nothing there. Followers may get the event message "You feel strange and out of time." off and on, regardless of meditation level and rank. It is unknown whether this is triggered by something or completely random.

Insanity path tiles are found inside mines, on any tile more than 2 tiles away from any ore veins or cave exits. Note that reinforcements and rock salt do not count as "ore" and will not block Insanity tiles from appearing.

After completing a meditation on a path of insanity tile the usual message of "This is indeed a special place" will not appear. Due to this you may need to try moving to different tiles and repeatedly meditating until you get a path question in order to advance. Certain Path of Insanity-specific "trance" messages may also appear when beginning to meditate, making it clearer that the tile is special.

If the wound is not dirty or infected it will not clean the wound.

You get the option on your body. This will fill your food bar to 99% and move your nutrition 98%. You can Fill once per day.

It seems that 'fill' works in a similar way to fasting. The message displayed is

Shield of the Gone

Gives a constant damage reduction that scales up per level.

You get the option on your body. This will teleport you to a totally random tile on the server (including water tiles, cliffs, fenced areas, and lava). Can be used once every hour.

You get the option on your body (in your inventory). This will instantly teleport you back to the token at your deed. Can be used once every 12 hours. It will only work if you have been part of the deed for more than 24 hours.

Your willpower now gives you the ability to deal a powerful short range blow to the enemies.

Final Breath has a 2 hour cooldown.

The answers for the path questions can be found here.

A large part of following The Path of Insanity is the player's character going crazy. This adds some fun roleplaying quirks that have no true effect on gameplay. Insane characters will occasionally see oddly named monsters that aren't really there. Also, randomly they may occasionally see the following message in their event window: You feel strange and out of time. This seemingly out of place message is actually the insane character performing involuntary, often disturbing emotes that other players see in their event window.

Sometimes, insane characters see mobs that are invisible to everybody but themselves. These can be noted from a distance as they always have unusual names. They can't be interacted with, tamed, or killed.

They can be named any of the following names:

They can be any of the following creatures: 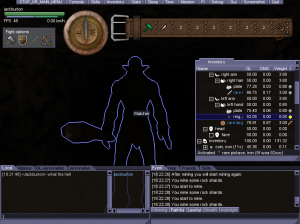 A troll named Watcher up close.

You feel strange and out of time

Nearby players may see the following emotes in their event window when an insane character receives the 'Out of Time' message: