A structure, built into a tree, in which some honey bee species of the subgenus Apis live and raise their young.

A wild bee hive is a randomly spawned item that appears on the side of trees (birch, cedar, fir, linden, maple, pine, willow). They appear in the spring, and vanish at the end of the Wurm year, in autumn and winter.

When a player is in the vicinity of a hive, a message in the event window will indicate so.

You hear bees, maybe you are getting close to a hive.

The bees noise is getting louder, maybe you are getting closer to their hive.

There is also a message when the player leaves the vicinity.

The sounds of bees decreases as you move further away from the hive.

The sounds of bees disappears in the distance. 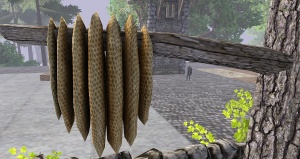 Wild hive on a branch

Wild bee hives are spawned in different locations each year.

Wild bee hives will not spawn...

A wild bee hive is spawned containing one queen bee.

A wild hive with two queen bees has a chance to migrate to a domestic hive.

The wild hive may have an attached descriptor to their name when you hover over it, which gives a clue to the status:

Bees can migrate do a domestic bee hive if certain conditions are met. There are also some things a player can do to increase the chances.

If a wild hive has one queen bee, the domestic hive must be of a higher quality than the wild hive.

If a wild hive has two queen bees, the hive quality will not affect the chances of migration.

If a wild hive's queen(s) have all migrated, the wild hive will be removed.

When opening a hive, the bees will sting you, dealing poison damage, unless you have a lit bee smoker.