Ussta Delmah is a size 10 homestead on Flamgra'in, an island in the northeastern area of Independence.

Ussta Delmah was a size 5 homestead on the western coast of Mol-Rehan Home, the great lands of Johen King. It was founded on wrath day in week 4 of the starfall of diamonds in the year of 994 by Ulviirala. 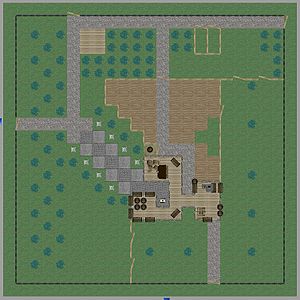 A map of the construction plans.

All of the perimeter was carefully planned, staying true to the not all-flat plzkthx and extraordinary building plans initiatives taken by its proprietor.

With the Jatha'la beldraein d'ussta delmah, Ussta Delmah features a three-rooms house on a small elevation. It is the main house on the homestead utilized for living, storage, and crafting. It has two 2x3 rooms, and a 2x2 room, all in all 21 usable tiles, enclosed by 34 sturdy stone walls. The path to the entrance is diagonal and elevated at the edges, paved with stone slabs representing teeth, hence why it is called The Jaw.

The Beldraen del quivveden d'ussta delmah is a small 2 by 2 wooden house of somewhat good quality, serving as a suitable doss for guests and travellers. It features plenty of room for storage and a bed for sleeping comfortably.

The western perimeter is mainly flat, the corners on the eastern side a rolling upwards with a gentle 4/4 slope, suitable for farming and for integrating the place into the landscape without a sudden abyss along the edges.

Ussta Delmah does not have many resources in its perimeter apart from a few harvestable trees and a few types of tree that are rather rare on Flamgra'in. A small part of the deed is used as farmland, growing grains, cotton, wemp plants, and a few vegetables. Within save walls, completely on-deed (not perimeter) Ussta Delmah also accommodates cattle, horses, and deer on the grassy areas.

Connected to the shore with a short and straight road, a shipyard and docks, deep enough to harbour even the greatest ships. The latest addition is the Oakmeal Inn adjacent to the docks and open for everyone.