An over 3 meters long muscle, this grey-green snake is formidable.

An anaconda is a long, dangerous snake that spawns primarily within influence of Vynora but has been known to spawn elsewhere on occasion. When idle, it is curled up on the ground like a rope, keeping a very low profile. Due to its green color, it is even harder to spot on grass, and most likely to be stepped on.

An anaconda is very strong (some say about the strength of a scorpion). Its bite causes medium wounds when in lower quality armour. Anacondas are rather slow and without being encumbered, it can be outrun easily, although it can chase for quite a while. It has a large target radius - before you see it, it will have seen you! 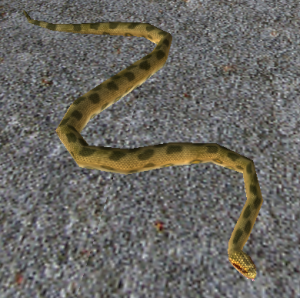 An anaconda looking at its dinner
Retrieved from "https://www.wurmpedia.com/index.php?title=Anaconda&oldid=119911"
Categories: